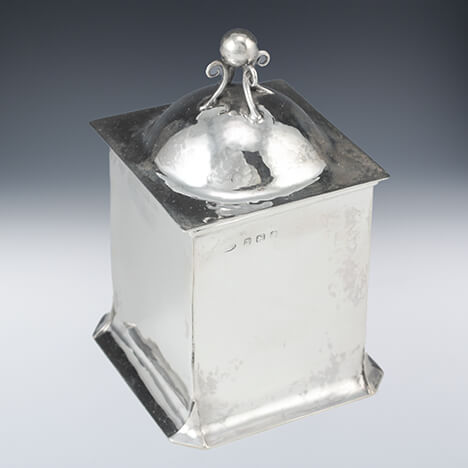 "A piece of silverwork, to be really interesting, must be endued with a Spirit of Art....." AE Jones 1906

Apprenticed to Woodwards then Hardman Powells, and trained at the Birmingham Central School of Arts, under Edward Taylor, AE Jones gained a reputation as a designer and innovator. He worked as a Guildsman at the Birmingham Guild of Handicraft where he was heavily influenced by the Arts and Crafts Movement and met many artists and designers.

Having worked at his father's premises he left the family metalwork business and set up in his own studio in 1902. The venture was a success and he was able to attract a talented group of artists and craftsmen, inspired by the Arts and Crafts movement, to his burgeoning workshop.

In 1905 AE Jones acquired Jesson and Birkett. This company’s trade mark of St. Dunstan (the patron saint of silversmiths and goldsmiths), would be used for naming his range of silver and silver embellished hammered copper items.

He collaborated with Edward Taylor's son Howson, owner of Ruskin Pottery, in mounting and using the coloured pottery as liners for some of his silverwork, which at this time was all hand raised. One of the Ruskin factories best known outputs was making ceramic buttons and these Jones used to decorate both his silver and copper productions. The cigarette, cigar, and playing card boxes mounted with a blue Ruskin roundel are probably one of AE Jones’ most recognised designs.

AE Jones’ output followed the mantra of William Morris ‘Have nothing in your house that you do not know to be useful, or believe to be beautiful’. He designed, and the company produced, mostly functional items. Everything had a use and very little was frivolous, some pieces being very straight forward in design with no decoration but simple forms with a hammered texture.

Following AE Jones' death in 1954, his son Kenneth Crisp Jones (who was also trained at the Central School of Art in Birmingham) took over the business in 1958, and it was more recently acquired by C. J. Vander of Sheffield.