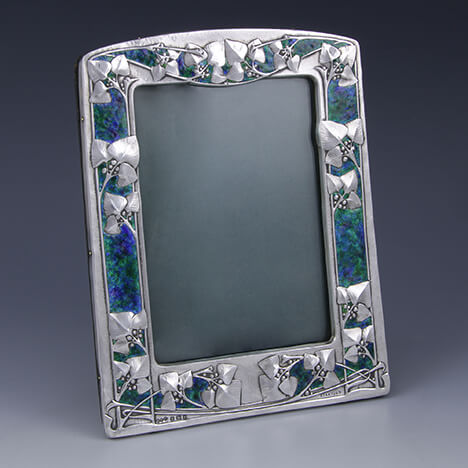 Archibald Knox (9 April 1864 in Cronkbourne near Tromode, Isle of Man – 22 February 1933 in Douglas, Isle of Man), was a Manx designer of Scottish descent. He is best known as being Liberty's primary designer at the height of their success and influence upon UK and International design (to the extent that in Italy, Art Nouveau was known as Stile Liberty). Knox's pioneering and prolific work bridged the Arts and Crafts Movement, Celtic Revival, Art Nouveau, and Modernism.

As a child, and a budding artist, Archibald Knox was powerfully impressed by the illustrative aspect of Celtic culture: the fine carved stone crosses scattered over the island; the intricate “lacing” and colour of illuminated manuscripts such as Ireland’s ninth century Book of Kells; the entrelac sinuous twistings of ancient Celtic metalwork like the famous Tara Brooch and the Ardagh Chalice, viewed on visits to Dublin.

In 1897 Knox also began designing for the Silver Studio and working for / studying with the pioneering designer Christopher Dresser in London. Dresser may have been the influence that Knox used for mixing the celtic motifs with modernist forms that his best designs are known for.  About this time Arthur Lasenby Liberty was looking for artists and designers to create his ‘Liberty style’ and commissioned Knox to design for his Regent St store. From 1900 to 1904 Knox returned to the Isle of Man, and produced over 400 designs directly for Liberty of London. Then he returned to teach at Kingston Art School (and Wimbledon Art School 1906/7), again following his friend A. J. Collister.

Knox resigned from his post as Head of Design at Kingston School of Art in 1912 following criticism of his teaching. About twenty of his students also quit and set up the Knox Guild of Design and Crafts. Knox was the Master of the Guild and would return to Kingston to exhibit with them.