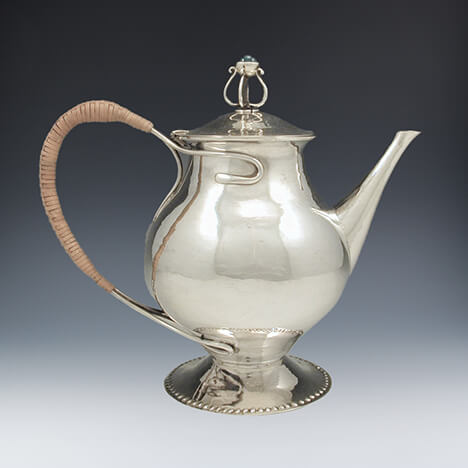 Growing up in the latter half of the 19th century, Ashbee was part of a group of wealthy and influential artists who were invested in ensuring that the art of handmade arts and crafts would not be replaced by factory-made products that were flooding the market. Ashbee and his contemporaries worried that delicate, handmade handicrafts were at risk of dying out, replaced instead by mass, machine-produced products. And so, at the turn of the 20th century, Charles Robert Ashbee and his Guild of Handicraft were at the vanguard of English handmade metalwork and jewellery. More so than any other British designer or manufacturer, he successfully combined the ideological and the aesthetic ideals of the Arts and Crafts movement.

Ashbee was born in1863, Isleworth, Middlesex, England After education at Wellington College and King’s College, Cambridge, and while actively involved in the social work of Toynbee Hall, Ashbee was articled to the architect G.F. Bodley. In 1887 Ashbee founded the School of Handicraft and in 1904 the School of Arts and Crafts, which continued its work until the outbreak of World War I.

It was when Ashbee founded the Guild of Handicraft in 1888, that the most notable works of decorative art, often to his designs, particularly in silver hollowware, jewellery, and furniture, were produced. The Guild expanded rapidly and in 1891 relocated to Mile End, in Essex House, a grand, Georgian mansion.

Sadly, the Guild, which relied on funding from the now defunct London City Council, had to close once the funding stopped. But Ashbee found a workaround, and made his dream of creating a ‘workers commune’ a reality. He relocated his organisation, along with its 100-strong students of mostly middle and working-class east London men, to the rural idylls of Chipping Campden in the Cotswolds. There, the Guild thrived thanks to the patronage of largely affluent locals until it closed in 1907, the model co-operative not being sustainable in its present form.

Ashbee continued to work as an architect and in 1909 Ashbee published `Modern English Silverwork`, a remarkable record of his achievement as a designer of silver and jewellery.

During the war years he lectured at Cairo University on English literature.

From 1918-22 he worked in Jerusalem advising on civic affairs and preservation of buildings and monuments. After this he retired to his wife’s family home in Kent, dying in 1942.

In 1900, on a trip to Chicago, Ashbee became acquainted with Frank Lloyd Wright, and, when Wright’s executed works were published in Germany (1911), the preface was written by Ashbee.