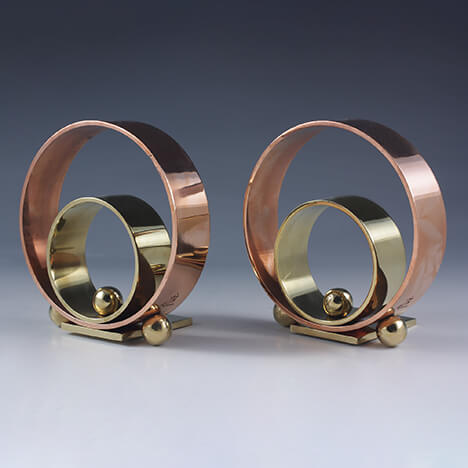 Chase Brass & Copper began life in 1876 as the Waterbury Manufacturing Company, producing thousands of goods for consumer and industrial markets.

In 1929, the Chase Companies (as they were known by that time), were acquired by the Kennecott Copper Corporation, and in 1936 the company was renamed the Chase Brass & Copper Company. Throughout most of the company’s earlier life, production centred around consumer and industrial products including copper pipe, buttons, screening, and novelties. By 1930, however, the Chase Companies recognized the demand for low cost, quality housewares, particularly products reflecting the modern style of the period.

There was no single reason behind the success of the Chase product line; rather, success stemmed from a combination of factors including effective marketing and promotion, well-designed products, and attention to manufacturing quality. The Chase product line was distributed through major department stores, gift shops, and jewellery stores across the country. Retailers were encouraged to establish small special departments, called "Chase Shops," within their stores.

The Chase product line of the 1930’s also thrived commercially as a direct result of the company’s practice of hiring some of the better designers of that era. Names such as Walter von Nessen, Charles Arcularius, Russell Wright, Lurelle Guild, Rockwell Kent, and the team of Gerth & Gerth, all were commissioned by Chase at one time or another. In-house designers such as Harry Laylon contributed to the strength of Chase design.  Although competitors occasionally used name designers, a strong case can be made that, across the entire product line, Chase demonstrated stronger design sense and execution than any competitor.

Less than a decade later, World War II dominated the political and commercial landscape, its effects making businesses change production and services. As a result, Chase’s decorative products were discontinued, their brief shelf-life dramatically boosting their status as collectibles. While the world was at war Chase provided much needed raw materials to the vast factory that American became.

The Chase Brass and Copper Company is currently one of the most significant manufacturers of ingot, brass rod, and other metallurgical products in the United States.