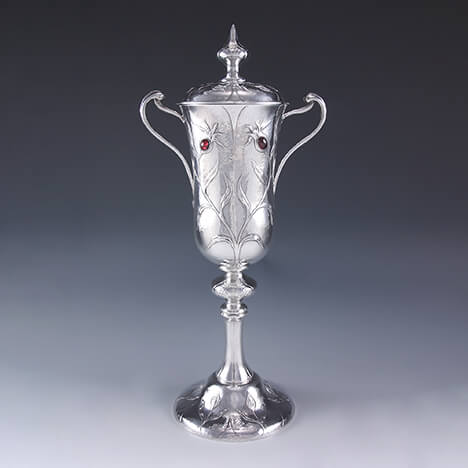 “I had grown sick of the way in which the methods of manufacture adopted to meet the public demand were killing the spirit of craftsmanship in metals…I do the designs myself, and never produce a duplicate. No die, or machinery, are employed, and so the artist’s fancy is at work upon the subject”. Gilbert Marks interviewed in Black & White magazine, London, May 1896

On leaving school in 1878 Marks was employed as a clerk by a firm of silversmiths [believed to have been Holland, Aldwinckle & Slater of Jewin Crescent, City of London], for whom he worked until c.1885 when he joined Masurel & Fils, wool brokers. During these years he spent his spare time developing his skills as an art metalworker.

In 1895 the first solo exhibition of his work was held at the showrooms of Messrs Johnson, Walker & Tolhurst, 80 Aldersgate Street, London in 1895. It consisted of salvers, rose-water dishes, goblets, and flower vessels in repoussé. A review of the exhibition appeared 'The Studio' in September 1895 pp. 219-220 which said that: "we were, on the whole, most pleased with the manner in which the metal had been treated by the artist. The surfaces of the objects were not over-ornamented, pleasant plain spaces being left which served to accentuate the beauty of the designs. The objects were free from meretricious machine turning and polishing, and were left in the natural dull white colour in which silver looks at its best. The marks of the tools employed in chasing or hammering out the design were not obliterated, and the whole of the exhibits had that pleasant sense of 'handwork' which is entirely missing in the majority of wrongly called artistic work produced under the direction of 'the trade.' We shall await with interest the further development of Mr. G. L. Marks' work."

Johnson, Walker & Tolhurst subsequently held a series of exhibitions of Marks' work until 1901. Between 1897 and 1903. he also exhibited at the Royal Academy in London; the Walker Art Gallery in Liverpool; Glasgow Institute of the Fine Arts; and Leeds City Art Gallery. There are a number of examples of his works in public collections, including a cup in the Victoria and Albert Museum (displayed in the silver galleries in 2013); and a silver, embossed and chased dish in the Fitzwilliam Museum, Cambridge. Marks suffered from ill health for a number of years and died in 1905.