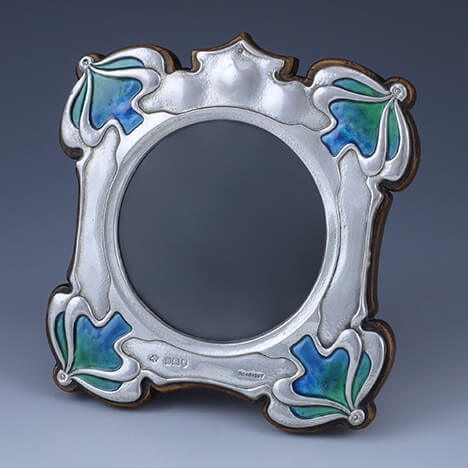 William Hutton & Sons were a respected manufacturing silversmiths known for their high quality output. Below is a short history of the company. What our website is concerned with is the items designed and sold by Hutton in the mostly 1890-1910 period. This is the time when they produced a number of designs in the then popular Art Nouveau style and also followed the fashion for Arts & Crafts items. Even though the Arts & Crafts ethos was buried in the idea of hand wrought pieces, Hutton managed to get the style just right and so its silver output of this time is highly regarded. There is little known of its designers, but Kate Harris and, more recently, Katie Allen are two names that have come to prominence.

William Hutton would have sold mostly through jewellers and department stores but also had their own showrooms. These may have been ‘trade only’ as the Farringdon Road address was an area known for jewellery and clocks. Hutton sold to some high end London stores who used their own marks such as WG Connell of Cheapside and the Goldsmiths & Silversmiths Co.

Hutton items turn up with various hallmarks on them. Some have been hallmarked in Sheffield, where the main factory was situated, some hallmarked in Birmingham, and many in London. This could easily have been ease of location to the Assay office where the silver would be tested and stamped. It also could be that they catered to the buying public. People from the north might prefer silver made in Sheffield and those in the south preferring silver from London, but that’s just an idea.

In 1800 William Hutton established his silverware firm in Birmingham, which later moved to Sheffield in 1832.

After William’s death, the business was continued in the same style by his son William Carr Hutton.

In 1863 a showroom in London was opened at 13 Thavies Inn, Holborn. In 1864, the name was changed to William Hutton & Son. This was a partnership of William Carr Hutton and his youngest son Herbert Hutton

It was in 1893 that the business acquired Rupert Favell & Co, a manufacturer silversmith based in London. That same year the company became limited- William Hutton & Sons Ltd.

In 1930 William Hutton & Sons Ltd became bankrupt. In the same year the firm was then absorbed by James Dixons & Sons.