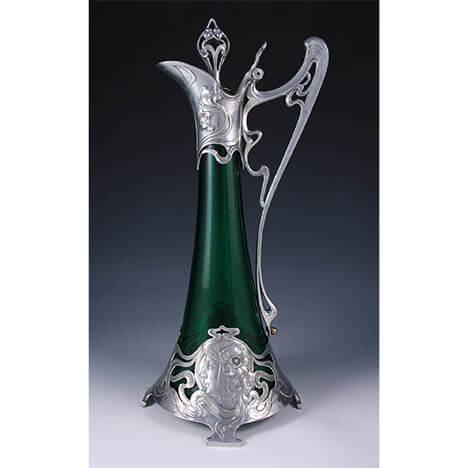 WMF known as "Württembergische Metallwarenfabrik" is a German tableware manufacturer, founded in 1853 in Geislingen an der Steige

WMF was originally called Metallwarenfabrik Straub & Schweizer and was opened as a metal repairing workshop. Through mergers and acquisitions, by 1900 they were the world's largest producer and exporter of household metalware. WMF produced items in many styles for every market, as can be seen in the reprint of the English 1906 catalogue, but they are most famous for the designs made in the Jugendstil, or Art Nouveau style, designed in the WMF Art Studio under Albert Mayer, sculptor and designer, who was director from 1884 to 1914.

WMF acquired the Polish metalware factory Plewkiewicz in Warsaw in 1886, which then became a subsidiary of WMF around 1900. During this period, the WMF employed over 3500 people.

In 1900, WMF acquired Albert Köhler's famous Austrian metalwork company AK & CIE, who produced and distributed WMF items under their mark to the Austria-Hungarian market until about 1914.

In 1905 WMF purchased Orivit AG, a company known for its Jugendstil pewter.

In 1906 WMF purchased the Orion Kunstgewerbliche Metallwarenfabrik, another German metalware company, again known for Jugendstil pewter. WMF continued to use the goods from the acquired companies on their own markets, and conversely, they produced and distributed their objects under their acquired company’s brands.

In 1955, WMF started production of commercial coffee machines. These products were designed for restaurants, military mess halls, cruise ships and other commercial applications.